The Bethune Pavilion in 1604

Philippe de Bethune was 40 years old when he acquired the ruins of the medieval castle of Selles-sur-Cher in 1604.

After a brilliant career as French ambassador for King Henry IV, he was looking for a property for his retirement to live with his family and to welcome his numerous friends and relations.

The property needed to have some income.

It was Jaques II Androuet du Cerceau, a parisien architect known already for his work on the Place Royal in Paris, now known as Place des Vosges, and numerous chateaux in the Loire Valley, who drew up the plans for this chateau in the 17th century. The construction lasted more than 7 years.

The workmen from Paris were lodged on the site during the work.

Access to the main court-yard, where the Pavilion Bethune is situated, is by a grand drive which leads to the bridge crossing the 21-metre-wide moat.

The entry to the court-yard is by a central gateway where the old drawbridge was situated. It is made up of 3 sections separated by Tuscan columns; the main entry through an arch in the center and an entry on either side for people on foot.

The central arch is decorated above with a wide carving. There are spaces for defense using firearms and canons. According to Jean-Pierre Babelon, the historian’s description in his work of 2012.

The decoration above the gate which dates from 1823 represents the arms of the Bethune family. Two bearded men hold the coronet of marquis Philippe de Bethune surrounded by the collar of Ambassador.

The walls on either side of the entrance are decorated with occuli which are reminiscent of the chateau of Rosny built for Maximilien de Bethune (Sully) in 1598-1599. Another sign of the architect Du Cerceau.

The chateau of Selles-sur-Cher resembles the architecture of the Place des Vosges: sharply sloping roofs with pointed windows, mixture of white stone (tuffeau) and brick, high windows with small panes for light and elegance. You will notice the bright light in the Study of Philippe de Bethune. 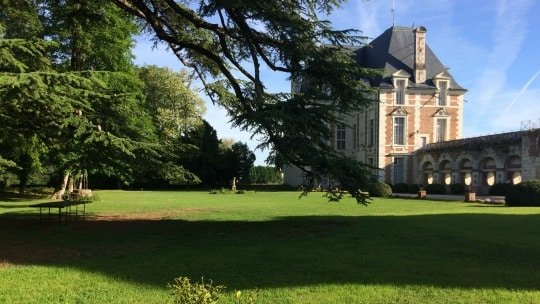 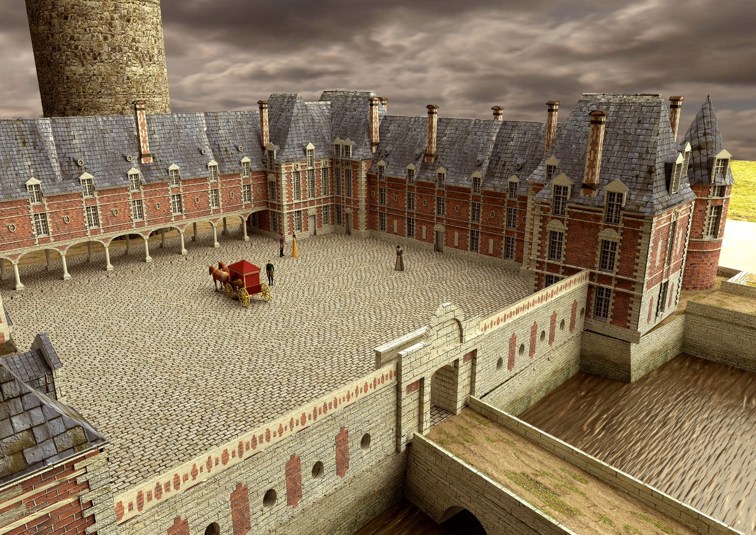 Well-known stone from our region.

Limestone: from the Beauce area, was used for the foundations.

Bricks: emblematic of the Sologne, were made on site, in the tower which was the brickoven.

Tuffeau: mainly from Bourre (41), mined from the hillside in Touraine. It is a white or yellow stone which is very easy to shape, and forms the ornaments of the facades of this and many other chateaux of the Loire Valley.

For cost reasons, they used local materials to facilitate transport. As in the work of Notre Dame de Paris where materials arrived by the river Seine, the Cher was used to transport the stones to the foot of the work at the chateau of Selles-sur-Cher. The landing stage is still visible from the main court-yard.

One of the biggest chateaux of the Loire Valley

Today, more than 1500 m2 of the original chateau is missing. Abandoned, then bought by speculateurs -la bande noire – it was sold stone by stone as was done at the time. (After the Napoleonic wars)

This 3D clip, which is part of our 3D visit, shows the Pavilions as they were built in the 17th century.

Trick of the architect

When you are facing the two Pavilions Bethune and Sully, look carefully at the facades: it is impossible to see clearly the internal organization of the floors. The living quarters do not correspond with the external architecture. This is the desired illusion. From outside, one can see 3 levels in the Pavilion Bethune from the ground to the attics, when really there are 7!

This is the main chateau. This is where the living rooms are to be found, and where your visit of the chateau will begin.

You can find out more about which cookies we are using or switch them off in settings.

This website uses cookies so that we can provide you with the best user experience possible. Cookie information is stored in your browser and performs functions such as recognising you when you return to our website and helping our team to understand which sections of the website you find most interesting and useful.

Strictly Necessary Cookie should be enabled at all times so that we can save your preferences for cookie settings.

If you disable this cookie, we will not be able to save your preferences. This means that every time you visit this website you will need to enable or disable cookies again.